A new addition to the Republic of Korea’s National Assembly complex building was completed late last year. INNOVILT, a premium line of steel construction material products made of POSCO steel, was used in building the new facility, which takes shape as a twisting stack of multiple narrow layers.

Recent press conferences held at the new Communication Hall – a completion ceremony was held on December 23rd last year – have brought the building into the public spotlight. The project began as a solution to two pressing problems: the National Assembly complex required more workspace and waiting rooms for government officials (as most of South Korea’s government branches have moved their offices to Sejong City), and expansion of press room space, as a growing number of journalists and media outlets demanded.

We are now living in an era of mobile communications and ubiquitous internet connections in which anyone can express their complaints anytime, anywhere. What concept would have been the most appropriate for the new facility that was to replace the ageing Welfare Hall? At the time the original project was announced, its design competition guidelines, themed around “communication”, specified the design for a “symbolic smart office facility and press centre” with a “high level of flexibility to meet the ever-changing needs of society.”

A simple square shape was the design the winning architect decided on, choosing to honour “the formal monumentality of the current National Assembly complex.” Utilising the existing order of the complex in the design of the new building, the decision proved to be wise. The 4-storey facility has a total floor area of 24,732m2, with a straightforward space arrangement designed following the project guidelines’ office space and press room requirements.

The Press Centre and the Smart Work Centre are located on the 2nd and 3rd floors respectively. There is an underground parking space, a cafeteria, and a shop on the ground floor, as well as offices on the 4th. According to the architect’s explanation, the division of functions by level was “to keep each floor independent to make more efficient use of office space and provide a productive work environment.”

As evident in the slight rotation of each floor, the design is much more dynamic than those seen in typical “boxy” building designs. From the outside, the building looks like a twisted stack of floor-plates, revealing exposed rooftop spaces which are then used as terraces that can be accessed with ease from the inside of the building. 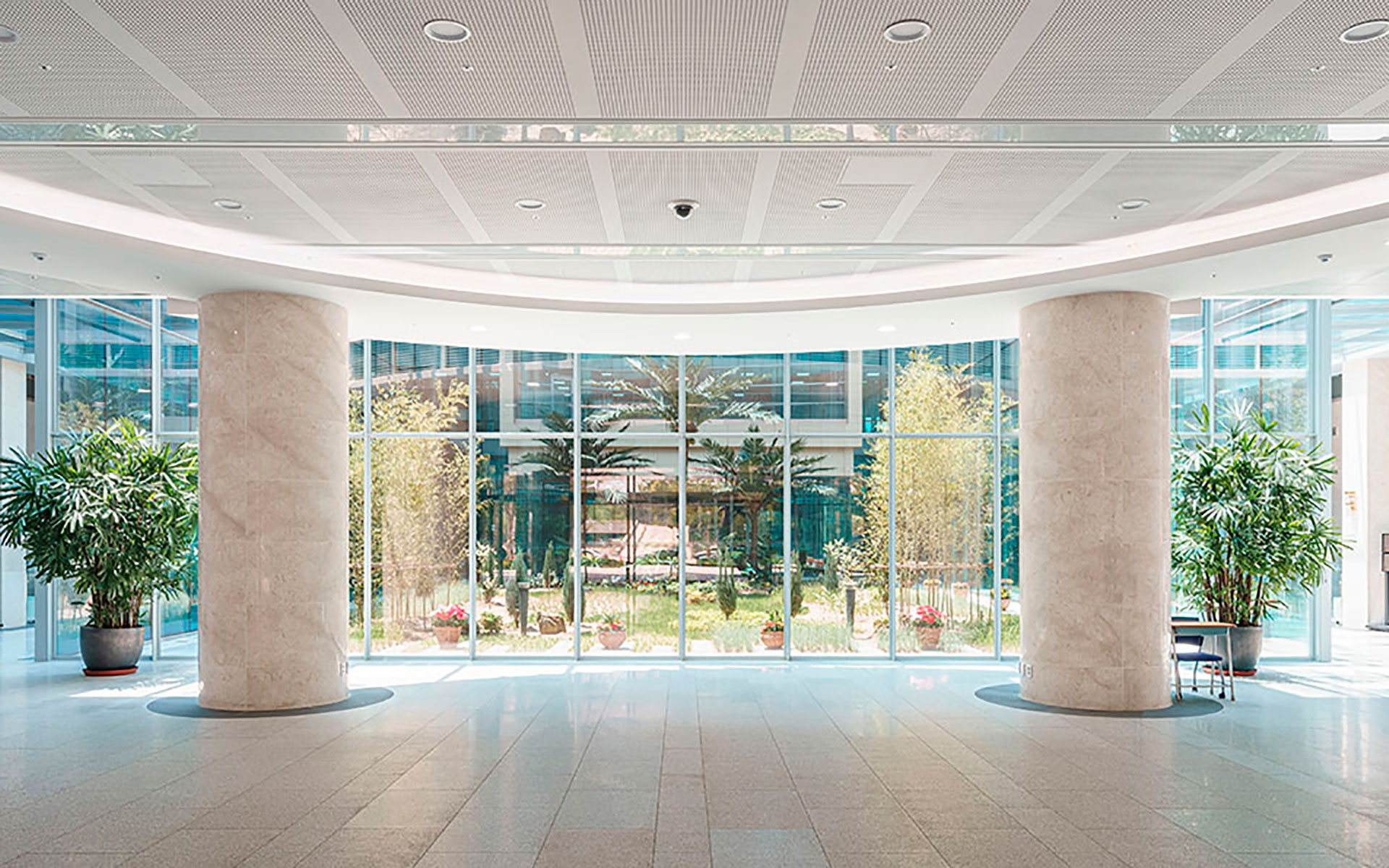 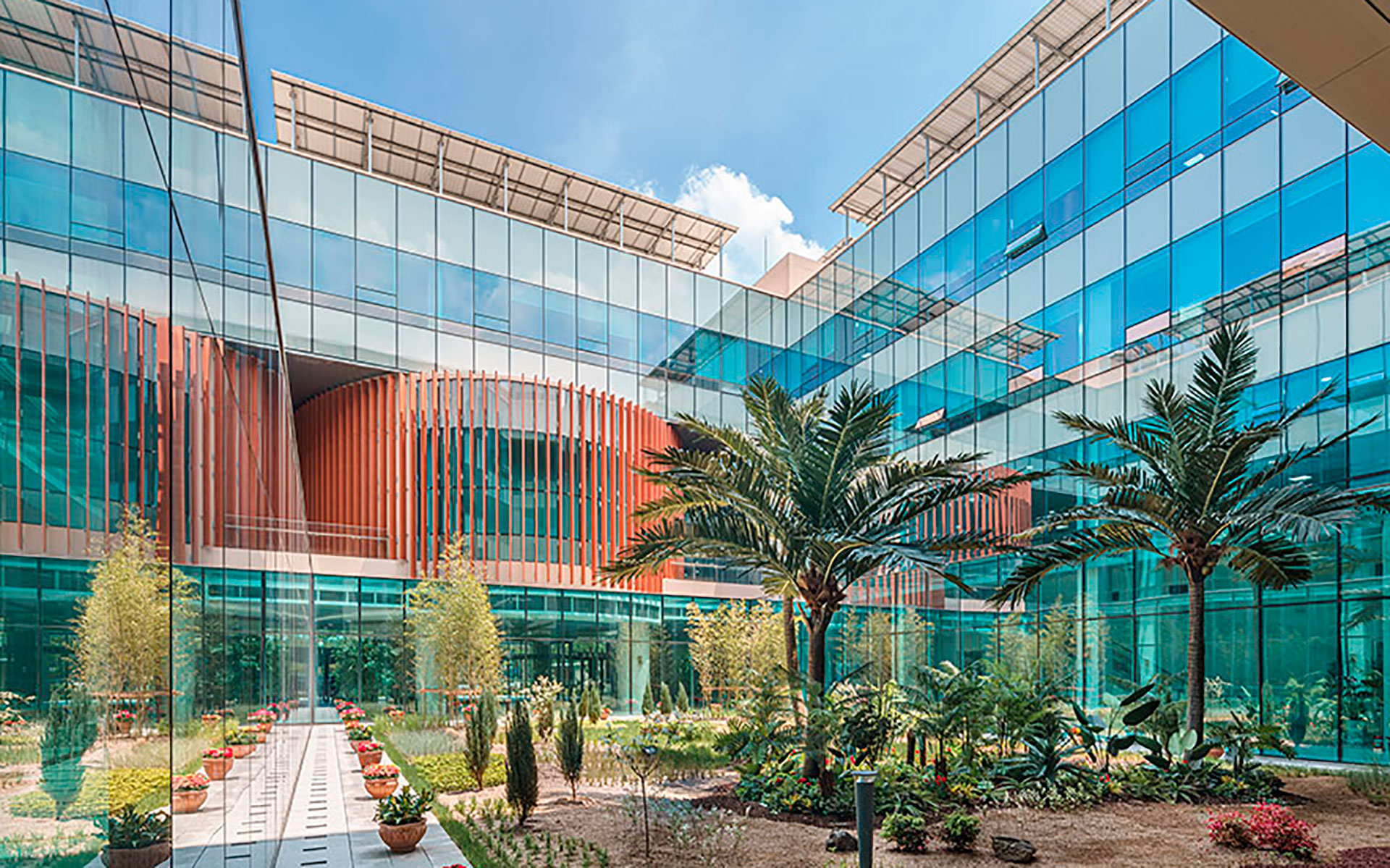 There are ample common areas, small and large, for short breaks and conversations, and the large central atrium incorporates green space into the structure. Four core areas surrounding the atrium divide the flow of press members, government workers, and the general public. In and around the building, the overall design gives a great sense of openness wherever you are.

Three INNOVILT products made of POSCO steel were used in the construction of the National Assembly’s new Communication Hall. The AU Beam and D-Deck (Double ribbed-Deck) from N.I. Steel Co., Ltd were used as beams and floorplates and Dukam Technology’s ES-Columns (“Earthquake-Strong” steel tube columns) were used for the columns. INNOVILT products made it possible for architects to work out a highly flexible structural solution that not only offered adequate strength and stability, the basic properties required in any structural material, but allowed faster construction along with greater space efficiency and earthquake resistance.

The AU Beam is a composite beam made of an A-shaped steel anchor cover on top of a U-shaped lower steel plate filled with concrete. The steel beam’s slim structure, with a depth smaller than that of a typical concrete column, allows greater floor height. Despite its smaller size, The beam ensures an increased rigidity thanks to the composite action of steel and concrete. AU Beam acts as a fit for purpose solution to the problems of bending and deflection that tend to occur in long-span designs with fewer columns and walls. Unlike the widespread practice of building a stud bolt between a slab and the top-end of a steel beam on-site, the AU Beam system, with its steel anchor also functioning as a connector, is easier and faster to install.

Another one of the latest construction technologies applied in the Communication Hall building is the D-Deck. D-Deck, a construction method designated as Korea’s New Construction Technology in January this year, uses an inverted-triangular-shape wire girder and a deck with two ribs. The girder is placed on the lower-part between two ribs of the deck which is made of steel plate. The wave-like shape of the deck, whose section looks like a series of camel’s humps, provides better strength preventing any potential deflection or deformation of the structure while allowing designs with fewer beams and longer spans. While the reinforced concrete deck can be installed up to 4m long without beam, the D-Deck can be installed alone up to 6-8m. The construction work is also straightforward and does not require welding – simply positioning the girder on a spot between the two ribs is enough.

The 3rd feature of the project is the use of the easy-to-construct and earthquake-resistant ES-Columns instead of the more broadly used H-beam or reinforced concrete columns. The ES-Column made of POSCO’s high-end earthquake-resistant steel is a composite column system which consists of a structural steel tube within a concrete-filled square-shaped steel pipe, bringing the total amount of steel used down to a minimum and offering better shock and fire resistance.

The fact that no complaints were brought against construction costs is a testimony to the economic feasibility of INNOVILT construction materials. The INNOVILT products were applied in building the Communication Hall in order to minimize the workload at the construction site while providing improved levels of stability and shorter construction time at a lower cost.

Open spaces in and around the Communication Hall are expected to be enjoyed by all citizens once the current Covid-19 crisis is over. Creating an abundance of delicate spaces, the new facility is a successful design that blends the 70’s architectural theme of the National Assembly Building with the innovative steel construction technologies of today.