Engineers at TK Elevator have created an innovative multidirectional lift system that could revolutionise urban mobility and the design of large buildings.

The world’s population is becoming increasingly urbanised. According to a UN study, an extra 2.5 billion people could be living in towns and cities by 2050, meaning 68% of the global population will be residing in urban spaces.

With this worldwide population shift putting pressure on city infrastructure, efficient use of space will be paramount in any successful urban planning and development. It is here that a new system designed by German specialist engineering company TK Elevator could help architects unlock a building’s full potential.

The development team for the omnidirectional MULTI elevator are confident their system will enable architects to offer more floorspace in their designs thanks to a reduction in the number of lift shafts within any building.

These systems have barely changed for over 150 years and have limited building’s design scope as they can only operate a single car in each shaft. As the height of buildings has increased so the requirement to add extra lift shafts to allow passengers to travel quickly and efficiently through the structure has risen, impacting the amount of floor space available.

Thanks to its innovative rail design, the MULTI car system enables several elevator cars to circulate around a building rather than the two-car limit that most systems have. This ensures that dedicated cores are used more efficiently, reducing the need for multiple lift shafts while maintaining an efficient service for passengers.

The system works on a steel-built magnetic mechanism similar to that developed to propel high-speed trains in Japan. Electrical steel is at the heart of the electromagnetic motors that power the MULTI system.

Electrical steel’s properties allow for the generation of a significantly higher flux density than alternative materials, which increases the torque of the motor. This special steel increases the power of the system’s magnetic field and its high strength-to-weight ratio allows for smaller, lighter motors.

The MULTI moves along a set of steel rails that can be fixed vertically, horizontally – or even diagonally – on the wall of the elevator shaft throughout a building. Each lift car utilises its own linear motor technology to propel itself along these rails.

By keeping all the cars moving in a continuous loop along the magnetic rail system, MULTI can recover energy from descending cabs and instantly redistribute that energy onto tracks where ascending or horizontal movement is required. This smart aspect of the MULTI system allows architects not simply to rethink the design of their buildings, but also approach mobility and energy use from a completely fresh perspective.

In the back of each car a ‘sledge’ features a cluster of roller guides, a permanent magnet, brake and emergency fail-safe braking system. This sledge sits on the guide rails which boast coil units, energy and data transmission units that allows for precise coordination with other cars. These enable the car to travel at a targeted speed of 6m/s. This high travel speed will enable near-constant access to an elevator every 15-30 seconds, reducing wait times and improving mobility in large crowded buildings. 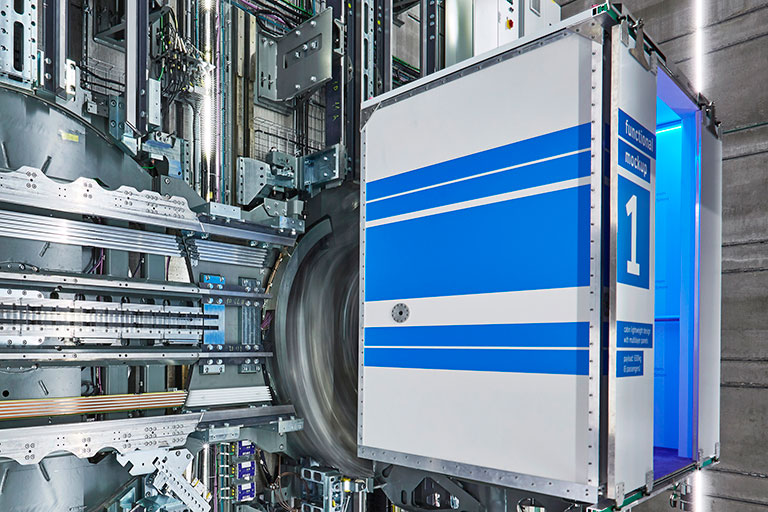 Built from high-strength steel, each lightweight car contains its own linear motor system 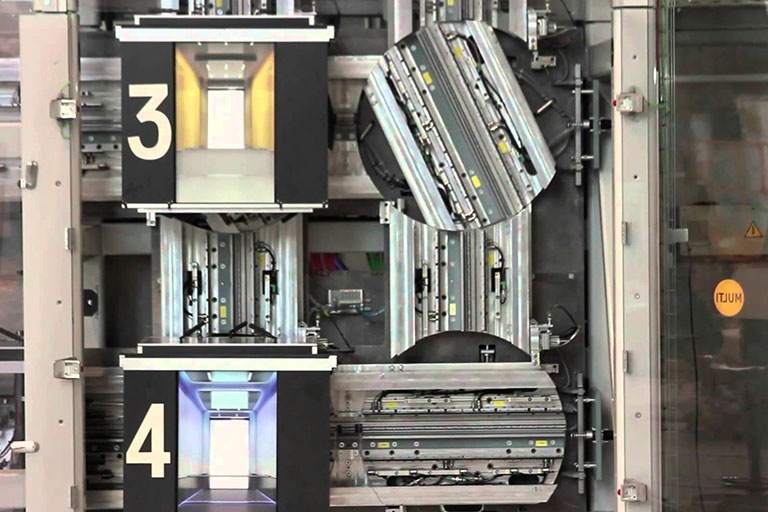 But key to the MULTI system’s operation is the unit which enables the car to pivot and change direction from travelling in the vertical plane to horizontal. The ‘exchanger’ unit features a locking device and a rotation drive which at the given vertical/horizontal track interchange locks onto the cab sledge, rotating it to the horizontal, enabling the lift car to travel in that direction.

The lift cabins are of lightweight design with high-strength steel playing an integral role in the fabrication of the sledge and exchanger, as well as the rails. The exchanger system must be particularly durable as the continuous use of the switching process places the junctions under high mechanical stress.

“From an engineering point of view, it is the exchanger that is key to the MULTI system,” explains TK Elevator’s Michael Ridder, “It is that which enables the safe circulation of multiple cars within a building.”

In theory the system gives designers the option to look beyond the confines of a building’s envelope and create a passenger transport system that is capable of linking buildings and even city districts.

In Berlin the MULTI system is due to be installed at the EDGE East Side development, a 36-storey office and commercial space development alongside the Mercedes-Benz Arena and Warschauer Straße station.

It is scheduled to be completed in 2023 and until then the only working installation of the MULTI system has been at the company’s 250m high test tower at Rottweil in south west Germany, specifically built to put the MULTI elevator through its paces, although there are several other installations that are currently under negotiation.

“The MULTI is the next stage in the evolution of the design of elevators. It will open up new possibilities for building designers and architects,” says Mr Ridder.

An experimental home in the Netherlands is providing powerful insights into the principles of sustainable design through the cold-formed steel frame that sits at its core.

The Lakhta Centre in Russia is not only one of the tallest buildings in Europe, it is one of the five most eco-friendly skyscrapers on the planet.

Even for a city with experience of earthquakes, the 6.3 magnitude tremor that struck Christchurch in February nine years ago was unprecedented in its impact.